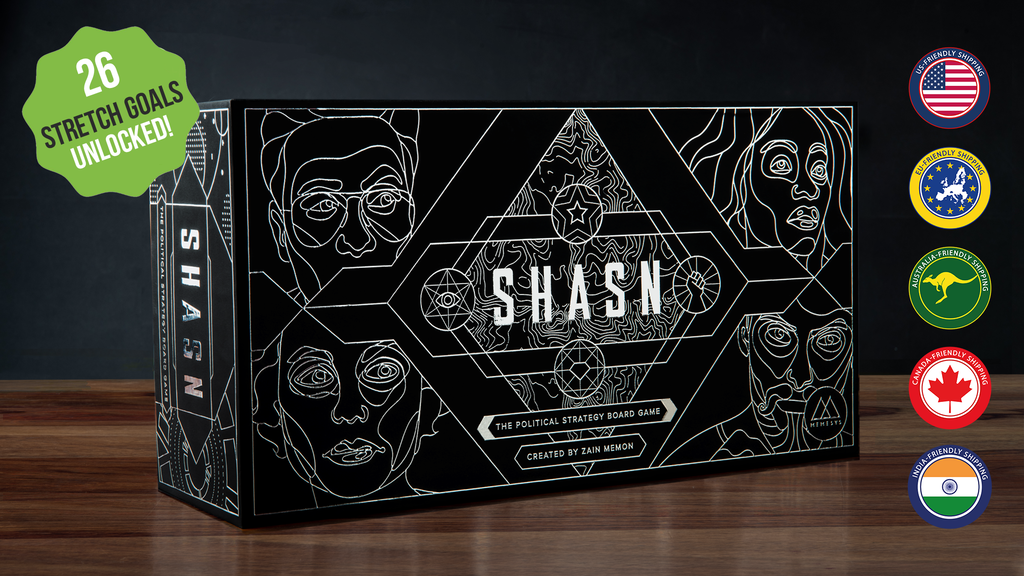 SHASN - The Political Strategy Board Game

An epic game of politics, ethics, and strategy for 3-5 players. Capture, gerrymander, and maybe even betray your morals to win.

Latest Updates from Our Project:

2 NEW ELITES ARE UP FOR GRABS!

The deadline to become The Dictator has passed. We received many great plans to run the world. Remember us when you do! Results will be announced soon.

Always ready to kick the hornet’s nest, The Provocateur thrives on the buzz of outrage and whataboutery. Nothing is too sacred, too innocuous for the mischief maker of political discourse.

Here’s your chance to Become The Provocateur!

Go to our social media. We have uploaded 6 images tagged with “Caption This.” The funniest, most unabashed caption wins. Entries will be scored on the basis of their humor, insight, and political relevance.

We will be accepting captions until 11:59 PM EST, 2nd August.

Please note that we will not tolerate hate speech of any kind.

Here’s your chance to Become The Propagandist!

“Excuse me, do you have a minute to talk about our lord and savior, SHASN?”

Election Update: The Finals Are On

With the primaries done and dusted, it’s a race to the finish between two blockbuster game modes. Only one can unlock. Which one are you rooting for?

The Capitalist - HOLD THE THRONE

Don’t let your grudges dissipate with this continuous game mode. The winner of the first game is crowned The Incumbent and must also win the successive game to clinch the match. Includes 10 Incumbent Cards with massive powers and a tracker book to record your matches.

The Showman - EDGE OF CHAOS

Walk the fine line between destruction and peace. All your actions in the game will either increase or decrease chaos in the world. If you reach the tipping point, democracy will crumble and anarchy will erupt. Learn to cooperate just enough with your opponents, so that there’s still a throne to fight for.

See you in the next update!

There are over 1200 of us! Over 1200 copies of SHASN are going to be on tables all around the world!

Somebody pinch me. A year and a half ago, we were just sitting around, mulling over an idea for a board game on politics. Today, on July 30th, our first ever campaign has raised over 100,000 dollars, has over 1200 backers - and I am almost at Gen Con with bags full of our beautiful, prized game. Is this the real life? Is this just fantasy?

What started out as just a bold experiment is now a full-fledged, thriving community with the most incredible people. Thank you for being on this journey with us. Your faith reassures me that the vision I had for this game is meaningful. I am so grateful.

None of this would have been possible if not for the open arms of the larger tabletop community. We have made many friends along the way, and there is a special one I want to tell you guys about.

You guys might know Jordan, the brilliant creator behind IMPORT/EXPORT and the fantastic Tokyo Series tabletop games. Well, he’s back with a heady, Definitive Edition of IMPORT/EXPORT that I can’t get enough of.

The campaign looks amazing. I especially love that backers will receive one of five randomised colors. The completionist in me wants to order it 5 times just to gather all the boxes. Can’t wait for my copy to deliver.

We have also unlocked 4 brand new stretch goals in the last 24 hours! We are officially unstoppable.

The Idealist’s next goal: Hit 1300 Backers + find a ridiculous law still active in your country. Share it online and tag us with @SHASNthegame and #SHASN

You also discussed politics and put up 1 video, unlocking 20 NEW CARDS IN THE INDIA 2020 CAMPAIGN!

You then proceeded to share 2 ridiculous quotes from politicians, unlocking the 3 MORE ELITES! ONLY THE 13TH REMAINS!

The Supremo’s next goal: Raise $110,000 + summarise the state of world politics in 6 words and share it online. Tag us with @SHASNthegame and #SHASN

There are still 10 more exciting goals to unlock. Let’s keep this going!

SHASN is over 1,000 backers strong! If you packed us all in one field, it would be one hell of a football game. THANK YOU EVERYONE.

The deadline for becoming the Elite #2 - The Activist has now officially passed. We have received some incredible submissions and will be announcing the winner by end-of-day Tuesday!

This also marks the beginning of Two New Elite Contests:

How would you go about seizing control of the world? Write a 3-Step Plan to run the world, post it online and tag us with @SHASNthegame and #SHASN

Submissions must be 10-150 words long and will be scored on the basis of creativity, length and humour. Please note that we will not tolerate hate speech of any kind.

Without The Patron backing Leonardo Da Vinci, there would be no ‘Mona Lisa’. ‘The Last Supper’ would not exist. Talent exists all around us, but few can identify it and coax it into greatness that stands the test of time.

A true Patron does not simply offer financial support, but is instrumental in the act of creation, guiding it with a steady hand. This is your chance to become The Patron!

The most active backer over the course of our Kickstarter Campaign stands a chance to become the Patron! Engage with the community, participate in the unlocking of stretch goals, and help SHASN bloom.

The winner will be announced on 17th August, after the end of our campaign.

In other Election News:

The Showman has almost reached the primaries!

You guys put out many, compelling political slogans and unlocked a new stretch goal: 3 New Elites!

Help The Showman reach his target to not only unlock two rewards at once: The Scenario Book (an eclectic mix of starting scenarios that put your skills to the test) and Movable Volatile Zones (for maximum chaos!)

Lastly, a reminder that SHASN will be at Gen Con ‘19. Don’t forget to register your spot to play! You can find our Gen Con schedule in the previous update or on our social media.